With NATO partners dropping like flies, and the Canadian government rebuking a recent effort by the US to remain in the Afghan War, the Pentagon is looking toward ensuring that the quantity of partner nations is kept up, even if it means pumping millions of dollars into the militaries of relatively minor nations to ensure they remain. 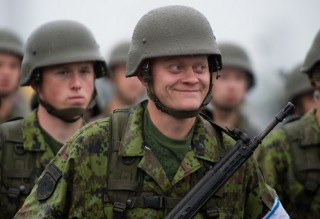 Following up on reports from the weekend, the Pentagon is confirming some $50 million in aid to be distributed more or less equally among Georgia, Croatia, Hungary, Latvia, Lithuania, and Estonia.

The $50 million is just the tip of the iceberg, and the overall program could cost upward of $350 million. It will include funding for both equipment for the nations, whose overall commitment amounts to just over 1.2% of the overall military force in Afghanistan.

Though the Pentagon insisted that the funding did not amount to “bribery,” they conceded that it was in part an incentive for the nations to keep literally scores of troops in the nation.

It keeps a large number of “partners” involved in the war, but does little for NATO efforts to increase the number of troops in the nation, as Canada and the Netherlands, both poised to leave, each contribute far more troops than all of these nations combined.

7 thoughts on “Coalition of the Rented?”