The NATO goal to dramatic grow the Afghan police force continues to flounder, fueled in no small part by the massive attrition rate, according to training commander Lieutenant General William Caldwell. 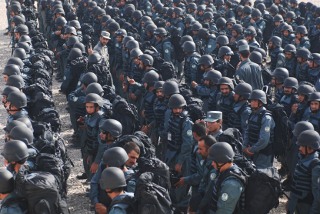 The enormous pre-graduation attrition rate is made doubly shocking, however, when one considers how little training Afghan police are actually expected to complete. Though class lengths vary, many recruits in recent months are graduated after only about three weeks of training, thrust into the warzone with virtually no idea what to do next.

The problems are not new, in 2008 German General Hans-Christoph Ammon predicted it would take another 82 years to have a properly trained police force in Afghanistan.