Under cover of darkness, former British Prime Minister Tony Blair arrived at Britain’s Chilcot Inquiry on the Iraq War today, using a side entrance to avoid the mass of antiwar protesters out front. He then delivered what was expected by many to be the key testimony moment of the inquiry. 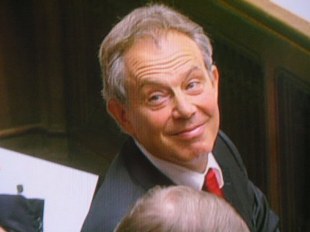 Incredibly, the former prime minister was totally unrepentant over the war, insisting that 9/11 had changed everything and speaking of the “threat” posed by Saddam’s weapons of mass destruction insisted “you could not take risks with this issue at all.”

So Blair took what was to him the non-risky route, helping the Bush Administration start a war that killed upwards of a million Iraqis and which, nearly seven years later, still sees over 100,000 international troops occupying the nation.

He conceded that Saddam never had anything to do with the 9/11 attacks, but repeatedly turned to them as proof that “religious fanatics” couldn’t be allowed to have WMDs. It was unclear how Saddam’s largely secular state fit in to this model, but he insisted that the “absolutely key issue was the WMD issue.” Of course, after seven years, no WMDs were ever found and most officials have conceded they never will be.

But Blair, ever the supporter of devastating wars “just in case,” appeared quite contented with his decision, to the revulsion of the parents of slain soldiers, who sat quietly watching as the crowds outside called for the former prime minister to face war crimes charges.

Not content with starting just one major war on false pretense, Blair ended his talk by declaring that Iraq’s neighbor Iran posed a similar threat for its also illusory WMDs, and urged the leaders of today to not “take any risks” with Iran either.