Back again like a bad penny, one of Afghanistan’s most notorious warlords, General Abdul Rashid Dostum, has been restored to his position as Afghan Army Chief of Staff by President Hamid Karzai. 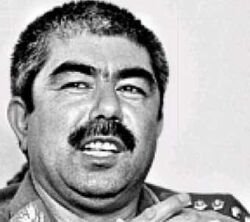 The announcement was not well received by the international forces, as US officials said they have “repeatedly” expressed concern over giving Dostum any role in the government, while British Foreign Secretary David Miliband promised to press Karzai to rescind the appointment.

Dostum was previously removed from the position amid controversy about corruption in 2008, but returned to favor with Karzai after he campaigned heavy for his re-election campaign last year.

Gen. Dostum is generally believed to be responsible for the infamous Dasht-e Leili massacre in late 2001. Dostum, who was on the CIA’s payroll at the time, was given custody of prisoners captured during the US invasion, and had around 2,000 of the prisoners either shot or suffocated to death. Investigators have suggested US troops were likely present during the massacre, and the Bush Administration fought against allowing any official probes for years.