In perhaps the most blunt assessment yet of the continually worsening situation in Afghanistan, retired General Barry McCaffrey predicted that the US should expect to be facing 500 casualties a month by summer. 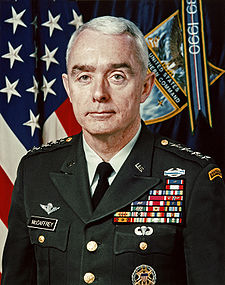 Gen. McCaffrey, who is currently a professor at the US military academy at West Point and came as part of an assessment of the war he has been doing regularly at the behest of the military since 2003.

500 casualties would be the worst single month numbers for US forces since the invasion, and is in keeping with several other predictions from officials that 2010 will top even the record violence of 2009, primarily as a result of the Obama Administration’s December surge announcement.

Tolls tend to be at their highest in the summer, as during the winter months much of Afghanistan becomes virtually impossible to traverse, and many militant groups simply “winter over” in mountain areas and renew attacks in the spring thaw.

According to General McCaffrey, the Obama Administration’s goal for improvement in 18 months is unreasonable, and he believes that the plan “will inevitably become a three to ten year strategy” that “may well cost us an additional $300 billion.” After nearly nine years of ever worsening conditions, even this seems optimistic.

8 thoughts on “General: 500 US Casualties a Month in Afghanistan by Summer”