The death toll in yesterday’s bombing against a Shi’ite Ashoura procession in Karachi continued to rise today, and at the moment officials say at least 43 have been killed while another 90 were wounded. 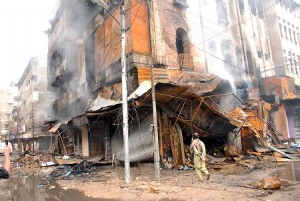 Attacks against Shi’ites have been a regular theme in Pakistan’s ongoing violence, though this is one of the largest to be directed specifically at them, and the first such attack in awhile, as most militants have been hitting military installations since the invasion of South Waziristan.

Anger over the latest attack sparked riots among Karachi’s Shi’ite minority, who set fire to buildings and tipped over cars on the streets. Firefighters were said to be still fighting the assorted blazes this morning.

President Asif Ali Zardari declared that the attack was a “deliberate attempt” to stoke sectarian tensions, not exactly a controversial suggestion. For the moment, however, the more important problem is that it seems to have worked.

One thought on “Suicide Attack on Pakistani Shi’ites Kills 43”