Most of the cabinet is barred from leaving the country, and Interior Minister Rehman Malik has arrest warrants out against him. President Zardari and most of what is left of his government are under intense pressure to resign in the face of mounting criminal charges and analysts are throwing around terms like “judiciary coup.”

What a difference nine months makes. That is how long it has been since the then-Zardari backed Supreme Court was being used to try to crush the opposition Pakistan Muslim League-N, banning its leadership from holding public office and threatening to arrest many of them for “sedition” for criticism of President Zardari.

The PML-N was initially part of Zardari’s coalition, but abandoned it late last year when the president reneged on a promise to restore the judiciary’s power. The attempted crackdown, using the neutered Supreme Court as a bludgeon, led to mass protests called “The Long March.”

In the face of ever growing protests and futile attempts by the Pakistani military to silence dissent, the government was forced to restore Supreme Court Chief justice Ifthkar Muhammad Chaudhry. But if Zardari thought this was the end of the matter then, he has since learned otherwise. 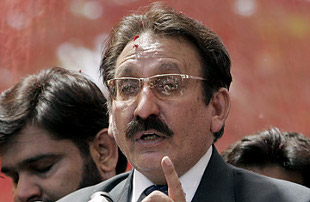 Chief Justice Chaudhry, it seems, hasn’t forgotten Zardari’s opposition to his restoration. In the nine months since he returned to power, he has overturned a myriad of edicts strengthening the presidency, returning power to parliament and increasing his own.

But this week he and the Supreme Court managed to overturn what was the key to Zardari’s administration, the National Reconciliation Ordinance that granted the ruling party’s leadership amnesty from corruption and other criminal charges.

The loss of the NRO may well spell the death knell for the Zardari government. But while Chaudhry knocked out the final support under Zardari, it was the president himself which set the stage for his government’s fall, both by reneging on the promises he made during the campaign and by appointing corrupt officials to key positions. Far from a judiciary coup, this seems the reassertion of judiciary oversight, something the Zardari government thought was dead and gone.

One thought on “Zardari Govt Flounders in Face of Resurgent Judiciary”