An American citizen visiting family in Tel Aviv spent much of the day looking at the Red Sea and waiting for officials to complete what should have been a pretty normal security check process. 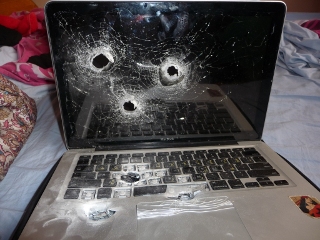 But Lily Sussman, the citizen in question, is seeing red after border police at the airport inexplicably attacked her Unibody Macbook (the latest model of the popular Apple laptop), shooting three holes through the screen.

Officials with the Israeli Airport Authority were quick to defend the attack, which has become something of a media storm in Israel, insisting that the police sapper who was called upon to slay the popular consumer device was “following procedure.”

As for Ms. Sussman, she’s relieved that the three shots pierced the screen but left her hard drive intact, but she’s also perplexed. Officials didn’t ask for her password to access data on the laptop and gave no indication as to why the sappers were called in to dispatch the Macbook.

14 thoughts on “Israeli Forces Attack Macbook for Some Reason”