Speaking today in Moscow, Russian Foreign Minister Sergei Lavrov rejected US threats to press for more sanctions against the Iranian government, insisting that the focus should be on diplomacy and that the repeated threats were “counterproductive.” 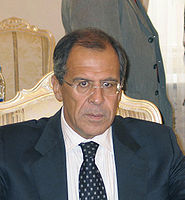 Lavrov’s comments came following a meeting with US Secretary of State Hillary Clinton, who was attempting to get specific guarantees from Russia to support new sanctions against Iran. The effort was, as Lavrov’s comments indicate, unsuccessful.

Despite this, State Department officials claim that Russian President Dmitry Medvedev gave Secretary Clinton assurances behind closed doors that Russia was still willing to back the sanctions if Iran didn’t implement the Geneva deal.

At the October 1 Geneva meet, Iran proposed a deal for Russia and other nations to accept low-enriched uranium from Iran, and enrich it to a higher level and return it for use in the medical industry. The offer was eagerly accepted by the P5+1 nations.

Despite the deal, and despite Iran having finalized a deal with the IAEA for new inspections later this month, the Obama Administration has continued to press for new sanctions, and continued to accuse Iran of seeking nuclear weapons despite ample evidence to the contrary.

10 thoughts on “Russia Rejects US Threats for Iran Sanctions”