Amid growing outrage in Pakistan regarding the Kerry-Lugar Aid Bill, the United States is reportedly working behind the scenes with top members of Pakistani President Asif Ali Zardari’s inner circle, one of the few factions in Pakistan that seems to support accepting the aid, to figure out how to salvage the package. 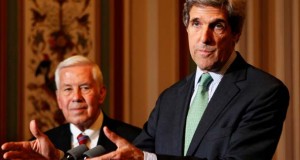 President Zardari has been meeting with senior members of his ruling Pakistani Peoples Party (PPP) to discuss ways to sell the bill to parliament, which is seen as almost certain to reject the bill following intense military opposition.

The bill, which passed through the US Senate last week, pledges billions of dollars in aid to Pakistan but issues a series of harsh statements and demands, including giving the US formal oversight over the nation’s court system and military. The onerous strings attached have led some in Pakistan’s government to term it a “treaty of surrender.”

The solution to these complaints, as it stands, is a public promise from Sen. Kerry that there are “no conditions” on the aid no matter what the bill actually says. Also seen as a key would be a signing statement from President Obama basically disavowing much of the language of the bill. Trust in US promises is in short supply in Pakistan, however, and it remains to be seen if it will make any difference at all.

9 thoughts on “US Scrambles to Save Pakistan Aid Package”