In what officials on all sides are assuring is not the start of any peace talks, US President Barack Obama will host a summit Tuesday in New York City with Palestinian Authority President Mahmoud Abbas and Israeli Prime Minister Benjamin Netanyahu. 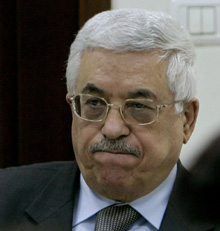 “These three leaders are going to sit down in the same room,” Reuters quotes an unnamed US official as saying. But so far it looks like sitting there is about all they intend to do, after a week of efforts by US envoy George Mitchell failed to accomplish any agreement.

Israel’s Foreign Ministry has promised that the meeting won’t mark the start of new peace negotiations, and officials say at best it will “prepare the groundwork” for a hypothetical future meeting.

The Palestinian Authority has ruled out holding actual peace talks until Israel agrees to freeze the expansion of its settlements, and Israel has repeatedly ruled out doing so. And while Hamas has criticized the summit, it seems right now that it won’t amount to much, if anything.

One thought on “Obama, Netanyahu and Abbas to Meet, Not Talk About Peace”