Just over six months after the Iraqi government sentenced journalist Muntadar al-Zeidi to a three-year prison term the reporter turned international celebrity was released from an Iraqi prison today, and promptly fled the nation. 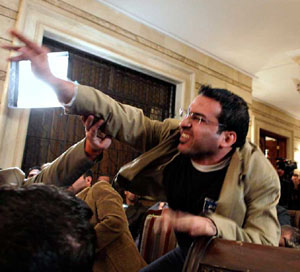 Zeidi, a relatively anonymous reporter who rose to fame in December when he pelted outgoing President George W. Bush with shoes, had his sentence eventually reduced to a single year, and then was released three months early on the basis of his failing health.

The journalist delivered a brief statement before reporters regarding his mistreatment in Iraqi custody, then boarded a private flight to Syria, his first stop on the way to Greece where he will seek treatment for torture.

Though his brother Uday had previously reported that Zeidi had been subjected to torture in government custody, including being forced to write an “apology” letter publicly delivered by Prime Minister Maliki which claimed there was a secret “mastermind” behind the plot, this was the first time Muntadar himself had been heard on the matter.

Zeidi, who is missing a tooth since his arrest in December, says he was whipped and electrocuted, and even subjected to waterboarding by Iraqi security forces in the wake of his arrest. The reporter now says he fears for his safety and is concerned that either Iraqi government forces or US intelligence services will attempt to have him “liquidated.”