Though US officials have yet to publicly say why exactly they invaded Somalia earlier today, privately some officials are being quoted as saying the attack targeted a Kenyan named Saleh Ali Saleh Nabhan and that he was ‘likely killed’ in the helicopter-backed raid. 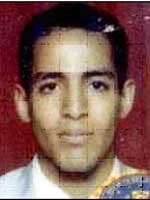 Exactly how important the 30-year old Nabhan actually was and what his killing means is unclear. Though many in the media touted Nabhan as a “top al-Qaeda leader,” his affiliation with the group isn’t readily apparent, and the FBI’s wanted poster simply lists him as “wanted for questioning” in connection with a 2002 attack on an Israeli-owned hotel in Mombasa, Kenya.

But reportedly President Obama signed an “Execute Order” ten days ago calling for the military to kill the Kenyan at the first opportunity, and sources close to the situation say the US considers its attack a success since they recovered a body they think might be Nabhan’s.

Several details of the attack on the village remain to be sorted out, not the least of which the multiple eye-witness reports that had the troops wearing French insignias on their uniforms – France insists it played no role in the attack.