Faced with rising criticism both internationally and from several high profile members of her own nation’s parliament, German Chancellor Angela Merkel lashed out over the issue of Friday’s deadly air strike in Afghanistan’s Kunduz Province, insisting that she “will not tolerate that from whoever it may be, at home as well as abroad.” 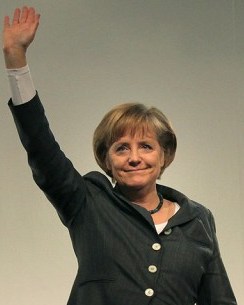 The Kunduz strike, which killed at least 70 civilians, has drawn considerable attention in Germany, as preliminary NATO findings suggest the German commander who ordered the strike violated rules designed to prevent civilian deaths and used a single informant as his source for the claim that no civilians were present at the time of the strike.

German officials have defended the commander, claiming they had information that the militants planned to use the hijacked trucks to attack a German base. This claim appeared to be refuted by President Karzai however, who reported the trucks were stuck in the riverbed at the time of the attack.

And with less than three weeks left to go before their national elections, the news that a German commander was directly involved in such a large number of civilian deaths has fueled antiwar sentiment in the nation, which has largely shunned military involvement internationally since World War 2.

For Chancellor Merkel’s Christian Democrats, the claims that involvement in the Afghan War is justified and indeed, that it isn’t really a war at all are facing renewed scrutiny. Merkel’s ability to sell a war-weary nation on their continued involvement is going to be key to the election’s results, and that gives her just a few short weeks to make a case.