In a radio interview today, former Attorney General Alberto Gonzales said that he thought the “limited probe” proposed by current Attorney General Eric Holder was legitimate, and said that it was important to ensure that people who went beyond administration directives were “held accountable for their actions.” 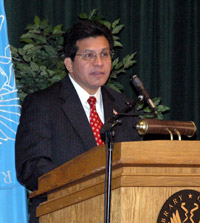 The probe has faced considerable criticism from other officials in the Bush Administration, notably Vice President Dick Cheney, who insisted that it was inappropriate to even examine the actions of the CIA agents in interrogation of detainees.

The questions about the CIA’s behavior were increased today, when they thumbed their noses at an order by a federal judge to release documents related to their interrogations conducted in “secret prisons.” The CIA insisted their publication would threaten national security.

Furthermore, they claimed that the public should only be entitled to hear about the “historical context” of their torture program, despite the administration already having released several documents pointing out specific instances of abuse. The ACLU, which had played a key role in seeking the documents, condemned the move.