One could hardly imagine a more bizarre source for an international diplomatic incident, but residents of the affluent New York City suburb of Englewood, New Jersey are outraged at reports that Libyan leader Moammar Gadhafi planned to stay in a tent in front of the Libyan diplomatic residence during his September visit to the United Nations. 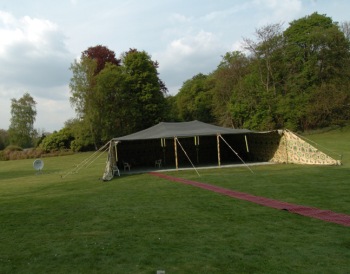 New York City has confirmed that Gadhafi had previously tried to get permission to set up his tent in Central Park, but was rebuffed. Now Englewood, which has been clashing with a local Orthodox synagogue over its own attempt to erect tents, is hoping to stop the Libyan leader. Protesters are putting up “no camping” signs in the area.

The US State Department says it indeed has the power to prevent Gadhafi from pitching a tent on the diplomatic grounds. So far, they claim to be making “progress” on coming to some other agreement, though the town’s mayor remains adamant that the leader is not welcome.

The diplomatic residence has largely gone unused amid tense relations with the US. The next door neighbor, a rabbi who wrote the book “Kosher Sex,” says that workers have been fixing up the residence for about a month, and is threatening to sue over some oak trees they cut down along the property line.

Rabbi Boteach’s problems with the Libyan leader appear to stem directly from the recent Lockerbie controversy, and he seemed to suggest he was fine with the apology he got about the trees before that happened. Now he’s furious.

Gadhafi reportedly has a phobia about being confined indoors and has often set up tents in visits to foreign nations. In June he set up such a tent in Rome, though he reportedly only used it for receiving visitors and slept in a nearby villa.

One thought on “Gadhafi’s Jersey Campout Plans Have Residents Furious”