A suicide car bomb attacked the front gate of NATO’s main headquarters in Afghanistan early this morning, killing at least seven and injuring at least 90 according to officials. NATO confirmed some soldiers were among the casualties but declined to provide numbers. The bulk of the injuries appeared to have been at the nearby Afghan Transportation Ministry, as the blast blew out the windows and glass wounded 57 according to a deputy minister. 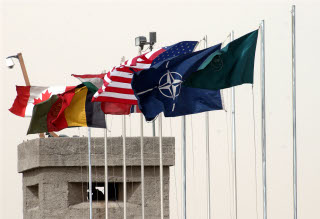 The Taliban claimed credit for the attack, saying the target was the NATO headquarters and the US embassy, which is next door. The attack is the first major strike in Kabul in six months and will likely raised security concerns just days before the presidential election.

Afghan President Hamid Karzai condemend the attack, but insisted it would have no effect on elections, insisting that Afghans “are not afraid of any threats.” Some Afghans however have been quoted in the media saying this will keep them away from the polls, with one noting he’d braved the dangerous election last time and all it had gotten them was more danger and violence.

NATO spokesman Brigadier General Tremblay said the explosion, which occurred just 30 yards from the front gate of the main military base in the nation, accused the Taliban of “indiscriminately killing civilians” in targeting the base. This accusation can’t help but draw comparisons to the NATO forces’ own checkered history of attacking presumptive targets (of considerably less value than the primary headquarters of an occupation force) and blaming the Taliban for the civilian deaths that result, calling them “human shields.”