The tensions from the disputed June election in Iran haven’t faded much, and today a group of former Reformist lawmakers in the nation called for the nation’s Assembly of Experts to investigate the nation’s Supreme Leader Ayatollah Ali Khamenei’s competency to continue ruling the nation after the post-election crackdown. 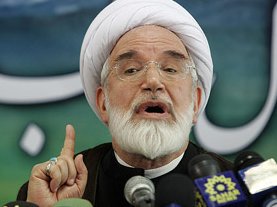 Theoretically the Assembly of Experts is empowered to make such an investigation and even remove the Supreme Leader in extreme cases, though it would be unprecedented in the history of post-revolution Iran for them to do so. Khamenei has made an enemy of much of the nation’s reformist constituency with his dismissive attitude toward their concerns about the June vote.

The lingering frustration appears to be in part related to the growing evidence of torture of detainees following the crackdown. Ayatollah Khamenei ordered one of the prisons closed over the allegation, but officials have rejected some of the more extreme allegations as unwarranted.

In fact, one of those putting forth the allegations, Reformist candidate Mehdi Karrobui, has gotten into some hot water of his own over claims of sexual abuse in the prisons. Top right-wing cleric Ayatollah Khatami has demanded the indictment of Karroubi on a charge of “libeling the system.” If the charge sticks, Karroubi could face “80 strokes of the lash” according to Iran’s state media.

2 thoughts on “In Iran, Reformists Call for Investigation into Supreme Leader”