Police in Pakistan’s capital city of Islamabad reported today that they have registered a criminal case against former President and General Pervez Musharraf for actions he took during his declaration of “emergency rule” in late 2007. 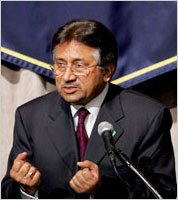 This means Musharraf, currently living in London, would face arrest if he attempts to return to Pakistan, though some are speculating that he may choose to remain in exile rather than face a littany of charges including the detention of Supreme Court justices and which some officials have suggested may ultimately include a charge of treason.

Musharraf came to power in a 1999 coup d’etat against former Prime Minister Nawaz Sharif, who ironically spent nearly nearly eight years in exile himself, facing arrest for opposing the coup. Sharif is currently the opposition leader, and has urged the government to bring charges against Musharraf.

The ruling Pakistani Peoples Party has ruled out trying Musharraf for treason without a unanimous resolution from parliament. The Pakistani Muslim League-Q, which held power during Musharraf’s reign but is now a minor opposition party, has mocked the calls to charge the former president, saying they lack the courage to try Musharraf over his crackdown.