US and British troops continue their offensive into the Helmand River Valley, chasing Taliban out of vilalges in the southern province and returning them to control of the Western-backed government. Far from being welcomed with open arms, the international forces are finding that most of the anxious villagers are terrified at the prospect that the troops will bring with them Afghan police. 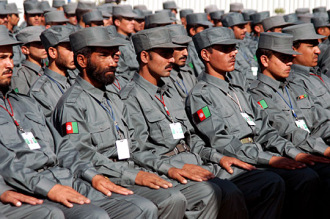 The Taliban’s de facto control over the area came after a string of bombings and attacks which caused considerable collateral damage among civilians. Despite this, after years of dealing with what they described as “brutal and corrupt” police, they welcomed the Taliban as liberators.

Corruption in Afghanistan has been a growing problem since the 2001 US invasion, and the society virtually runs on bribery and graft at this point. But Helmand villagers tell stories of police rounding up small boys and taking them to police camps to be raped, and robbing elderly villagers’ homes at gunpoint.

Given the reservoir of distrust and outright revulsion at the police many of these villagers seem to have, it is not hard to imagine that the routine targeting of police by the insurgency, far from being merely about destabilizing the Karzai government’s control is something of a confidence building exercise in and of itself.

Even with all the violence wrought by the insurgency, Helmand village elders say “the people here trust the Taliban,” adding “if the police come back and behave the same way, we will support the Taliban to drive them out.”