Russian President Dmitry Medvedev today praised President Obama’s decision to “review” the US missile defense shield in Eastern Europe, but warned that he was still prepared to deploy Iskander missiles to the Russian exclave of Kaliningrad to counter the shield if the US moves ahead. 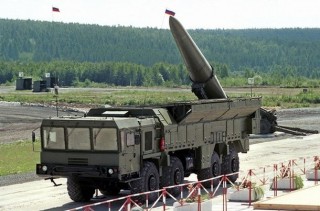 “If we cannot agree on these questions, you know the consequences,” Medvedev warned at a news conference today at the G8 summit. Medvedev did say that he felt Obama was a more productive president to talk to than President Bush was.

The Russian government has opposed the US missile shield from the start. The US claims the shield, with facilities in Poland and the Czech Republic, is aimed at protecting Europe from attack by Iran. It has not escaped Russian notice, however, that the shield lies far outside the range of Iran’s best missiles and remarkably close to Russian territory.

In November, Medvedev announced his intention to deploy Iskander missiles to Kaliningrad, an exclave near Polish territory, along with electronic jamming equipment to counter any effect the US shield would have on Russia’s military capabilities. The US has criticized the prospect as an “unfriendly” move.

One thought on “Medvedev: Russia Still Prepared to Deploy Missiles to Counter US Shield”