UN humanitarian envoy Abdul Aziz Arrukban warned today that the millions of Pakistanis displaced during the military’s offensive against the Swat Valley would “die slowly” unless the international community started taking notice of the “unprecedented” scope of the crisis. 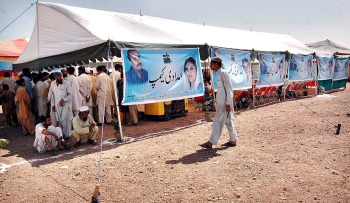 The enormous humanitarian crisis appears to have caught everyone by surprised, developing extremely rapidly in the face of the military’s attacks on heavily populated areas. The valley went from a somewhat restive region to an absolute warzone in a matter of days: a million civilians were displaced in the first week of fighting, within another two weeks, over 95% of the valley’s 3 million plus residents had been forced out.

As with last year’s offensive in the tiny Bajaur Agency, the Pakistani government was perfectly willing to displace civilians en masse to combat a relatively small insurgent population, and made little provision for the civilians who spent months in refugee camps. Indeed, the millions of Swatis are living in many of the same camps around Peshawar that the Bajauris were stuck in.

But even in the face of this enormous catastrophe, the Pakistani government seems unphased, and in fact is moving on with its plans for a massive offensive in South Waziristan which is expected to rival the Swat operation. Though far less populous than Swat, the hundreds of thousands of refugees pouring out of that region are heading to regions no more prepared for the influx than Peshawar was.