Hundreds of thousands of pro-Mousavi protesters remain in the streets of Tehran and other major Iranian cities, demanding that the Guardian Council throw out the results of Friday’s presidential election as fraudulent. But while the Intelligence Ministry reports having arrested those behind some of the violent episodes in the protests, the rallies show no sign of ending and the stalemate could go on for days while the Guardian Council finishes its investigation. 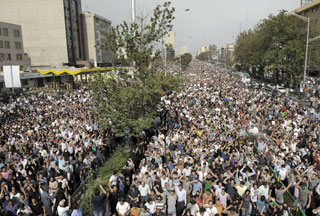 The government ban on protests appears to have had little effect, though the censorship of the foreign press has kept the exact details on the ground something of a mystery. One rights group claimed as many as 32 had been killed in the protests, though the state media’s toll was only eight. Most of the violence appears to be between the Mousavi supporters and informal militias, though police have clashed with the protesters in some cases. Mostly, the government appears content to let the domestic situation continue, and instead focus on the international criticism of the perceived crackdown. In particular, they have accused the US of meddling in the post-election situation, a charge which the State Department denies. The State Department has however conceded to pressuring social networking site Twitter to postpone a scheduled maintenance downtime because the site has been heavily used by Mousavi supporters. Officials insist the move was sparked by their newfound recognition of it as a “vital tool for citizens’ empowerment.” The State Department claims to be “in constant contact” with a number of social media outlets about the situation, which will likely fuel speculation that the US government is backing yet another color-coded revolution.