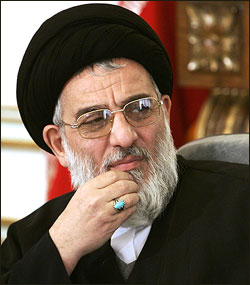 The 12 member panel is composed of six experts in religious law appointed by the Supreme Leader, and six jurists specializing in different aspects of the law, appointed by the head of the judicial system Ayatollah Mahmoud Hashemi Shahroudi (who was also appointed by Khamenei). Shahroudi is himself an interesting case, an Iraqi-born cleric who previously served as the head of the Supreme Council for Islamic Revolution in Iraq (presently one of that nation’s largest political parties). The council’s primary function is the interpret the Iranian Constitution, and to overturn unconstitutional laws. In that regard it has much in common with the US Supreme Court.

But the Guardian Council does much more. It is in charge of supervising elections, which is why it has figured so importantly into the recent disputes, and even has the power to vet candidates before the election, rejecting those it deems unsuitable for the office.

That may work in challenger Mir-Hossein Mousavi’s favor, as the Guardian Council had already examined and approved of his candidacy which gives him a measure of legitimacy in contesting the results. The council surely has the authority to overturn the results if they so choose.

But will it do so? That is less clear, and will likely depend on the number of factors we simply can’t know at the moment. In particular, the question of what exactly was done and who was involved will likely play a major factor. It is unthinkable that the Guardian Council would defy Khamenei, as he has appointed six of them directly, and the other six indirectly. Yet it is equally unthinkable that the group would allow its power, and that of the Supreme Leader, to be challenged by a potentially fraudulent election it was not a party to.