A large number of injuries were reported today as Georgian police attempted to violently put an end to months of opposition protests in Tbilisi. The protests have persisted as opposition grows to President Mikheil Saakashvili, which they have blamed for the disastrous August war with Russia. 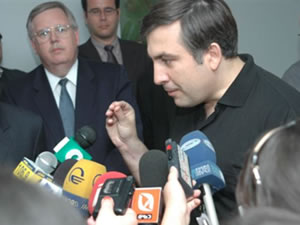 Their position was strengthened as unpublished documents came to light from the European Union’s probe of the conflict, which also placed the bulk of the blame on Saakashvili. One of the commission’s members put it thusly: “Georgia’s dream is shattered, but the country can only blame itself for that.”

The Georgian president ordered the capital city of separatist province South Ossetia shelled, killing Russian troops and sparking a battle that destroyed most of Georgia’s military and ultimately led to both South Ossetia and Abkhazia declaring independence formally.

President Saakashvili saw his popularity soar during the brief war, and promised to regain the enclaves. His government’s shaky human rights record and the consequences of the war have undermined his popularity.