A car bombing targeted a crowded market in the mostly Shi’ite town of Bathaa today, killing at least 35 and wounding 45 others. Witnesses say a man in western-style clothing, unusual in the small town where traditional clothing is the norm, parked the car and walked away. 10 minutes later, it exploded. 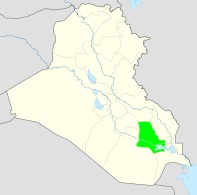 The small town of Bathaa, some 20 miles west of the Dhi Qar Province capital of Nassiriyah, has no hospital of its own, and it is reported that many of the slain died en route to the hospitals in the larger capital. One of Nassiriyah’s surgeons reported that at least four victims died on his operating table from loss of blood during the voyage.

The town had not seen significant violence during the six year long war, and had a very relaxed atmosphere. Police even acknowledge knowing about car bombs smuggled into the province, but say the precautions were all carried out in Nassiriyah, which they assumed was a more likely target.

So far no group has claimed credit for the attack, but given the town’s Shi’ite composition it is presumably al-Qaeda or one of the other assorted Sunni militant factions in the nation. Sunni-Shi’ite tensions, responsible for a massive civil war earlier in the war, have been on the rise again in recent days, fueled by the Maliki government’s treatment of the Sunni Awakening Councils.