Last week, the Israeli government dropped exploding boxes full of leaflets across the Gaza Strip, informing the Gazans that if they came within 300 meters of the border they would be shot. The leaflets damaged several buildings and injured a child, but the real harm is yet to come. 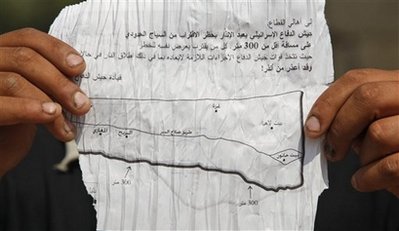 According to the United Nations, the 300 meter buffer has cut the Gazans off from 30 percent of the strip’s arable land. “The war increased the amount of land destroyed, particularly in the border areas, and the farmers can’t replant anything because it’s too dangerous,” according to one UN official. “The Israeli soldiers, they shoot at everything – dogs, sheep. They are very tense.”

The Israeli invasion of the strip earlier this year caused thousands of civilian casualties and damaged a significant portion of the strip’s buildings. Israel has barred reconstruction materials from the strip, and has severely limited the sorts of food allowed in. At one point they barred all pasta from entering Gaza.

Since the war, Israel has shot several Palestinian farmers for tending fields near the border fence. The region’s Hamas government says that the strip is capable of producing enough watermelons and onions to nearly satisfy domestic food demand, though it is unclear if these projections accounted for losing such a significant portion of farmland.