Though there are reportedly still clashes on the outskirts of town, the Pakistani military says that it has reclaimed full control over Mingora, the largest city in the Swat Valley. Mingora has been under the control of the Tehreek-e Taliban Pakistan (TTP) since May 5, a day after it announced it was withdrawing from the Malakand peace deal. 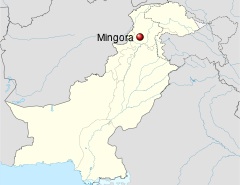 The military’s month-long offensive, which has displaced millions in and around the valley, seems to be reclaiming significant ground, as Interior Minister Rehman Malik announced today that the districts of Buner and Lower Dir, both on the outskirts of Swat and the first hit by the military, are “completely cleared” and that refugees are free to return to their homes.

Yet that claim seemed to be in serious doubt, as it was reported that TTP militants continue to patrol villages around the Buner town of Pacha Killay. The militants also reportedly have killed three residents of the town they believed were “spying for the Army.”

TTP leader Baitullah Mehsud has reportedly ordered members to launch bombings in smaller villages in Swat, and has said that the group will need to find new hideouts outside of the Swat Valley because of the large army presence.