As the Pakistani military’s offensive against the Swat Valley continues, around 1.45 million are reported to have successfully fled. For several families today attempting to leave their homes, that trek ended in disaster as the Pakistani military attacked and killed several of them, and wounded an unknown number of others. Women and children were among the slain. 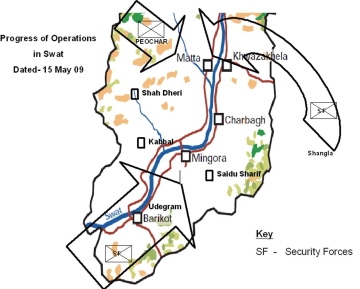 Witnesses who managed to escape the attack and reach a town in Upper Dir say the party of civilian families were crossing a mountain path after leaving their homes in the town of Matta, when they were attacked by the military’s helicopter gunships. Matta was the latest Swati town to be targeted in the ongoing offensive.

Police confirmed the incident, but declined to say how many civilians were slain. Locals put the number at 12 to 14. The Pakistani military has been harshly criticized for its indiscriminate shelling against residential areas of Buner District, but this appears to be the first time they have deliberately targeted civilians. So far, there has been no comment from the military except to update the number of “suspected miscreants” killed in the offensive.