A new UN human rights report issued Tuesday on the Saudi-led invasion of Yemen has found that the invading coalition caused heavy civilian casualties, and committed violations that “may amount to war crimes.” 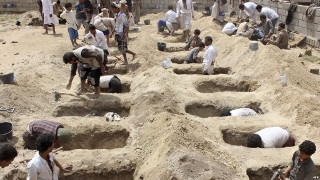 The report noted Saudi and UAE forces killed thousands of civilians in airstrikes, tortured detainees, raped civilians, and used child soldiers as young as eight. The two nations repeatedly hit residential areas and there is “little evidence of any attempt by parties to the conflict to minimize civilian casualties.”

The UN report also made note of the “no strike list” of 30,000 civilian sites in Yemen, including refugee camps and hospitals. Officials found the Saudi-led forces failed to consult their own list time and again during airstrikes.

The UN report largely mirrors last week’s report from Human Rights Watch, which likewise found that the Saudi-led coalition had failed to stop violations of human rights, and was carrying out investigations that lacked any credibility.

Previous UN reports haven’t been well received by the Saudis and in those cases, angry moves to the UN Security Council and the backing of the US ultimately forced the UN to withdraw the reports, despite finding no fault with any of the facts within.