A group heavily funded by the US and British government, the White Helmets NGO found itself without an area of operation after rebel-held Eastern Ghouta fell to the government. Some, however, are relocating north, into rebel territory there, to try to get involved. 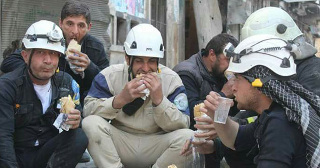 While in Ghouta their duties were mostly being present at rescue operations, and issuing statements condemning the Assad government that would be repeated across Western media outlets, in the north they are helping with street cleaning and the like, wherever they can fit in.

With an offensive against rebel-held Idlib looming, the White Helmets will likely again be called upon to provided play-by-play accounts that fit in the Western narrative. In the meantime, it means serving as volunteer workers for rebel groups like al-Qaeda’s Nusra Front.

They aren’t making themselves a ton of friends, either, with Kurdish media outlets reporting that the White Helmets’ sudden arrival in Afrin District, a Kurdish-held district occupied by Turkey and since handed to rebels, has them seen as “whitewashing” the military occupation of a Kurdish enclave.