National security adviser John Bolton is bragging about the newly imposed US sanctions against Iran on Wednesday, saying that they are far more effective than even the US expected. He said it had a major impact on the Iranian economy and popular opinion. 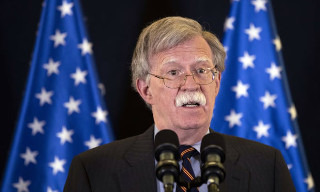 In particular, Bolton noted the soaring food prices in Iran, and public protests inside Tehran. Whether these are a direct result of the sanctions, only recently put back in place, is unclear. Expectations of US sanctions did indeed send the Iranian rial down in value, but many officials are blaming mismanagement for the worst of the increases.

The protests, likewise, are not a result of US protests, but rather the result of a separate US policy to foment public protests inside Iran. The protests, having successfully been provoked, are then used by US officials are “proof” Iran’s government isn’t meeting the public’s expectations.

Either way, Bolton says that the current US policy is not to try to impose regime change in Iran. Instead, he says the goal is to impose radical changes in Iranian government policy, changes which the US isn’t particularly specific about, but which Bolton maintains the US is as of yet not seeing.

8 thoughts on “Bolton: Sanctions on Iran More Effective Than Expected”