Major diplomatic progress between North Korea and its neighbors has turned the regional geopolitical situation on its head. But the problems of North Korea, beyond the military issues, are omnipresent, and that means regular food crises. 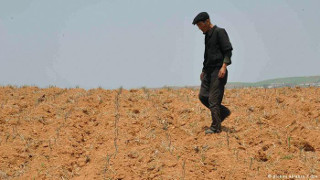 The newest North Korean food crisis looks to be a particularly bad one, as despite significant diplomatic progress the US has been pushing the international community for ever-stricter sanctions, and that’s keeping humanitarian aid from flowing.

Theoretically, this isn’t by design. US and international sanctions are meant not to cover humanitarian activity. In practice, however, aggressive US enforcement has ground a lot of aid operations to a halt.

NGOs are very clear on the problem, with those trying to provide farming aid to North Korea finding that a formal international ban on anything made of metal makes it impossible to import machines or equipment, or even just spare parts for the machines they already have. Medical aid is also increasingly problematic, as doctors can’t import things as basic as spoons or nail clippers because they’re made of metal.

A lot of aid groups are so sick of dealing with all the obstacles that bureaucrats insist aren’t support to exist that they’ve pulled out entirely in recent months, saying they just can’t operate this way. Now, with the growing food crisis, something that happens regularly because of generations of sanctions, no one is in a position to help, and US sanctions seem to be keeping even the most basic aid out.

5 thoughts on “North Korea Faces Food Crisis, But US Sanctions Are Blocking Aid”