Officials in the Saudi-backed Yemeni south have expressed concern for awhile about a growing separatist movement there. Those separatists are making themselves increasingly felt, attacking a graduation ceremony at the military academy in Aden. 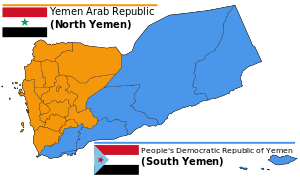 The separatists reportedly objected to the event flying the flag of unified Yemen, instead of the flag of South Yemen, and opened fire on the ceremony. One cadet was killed and two wounded in the salvo.

There has been a growing separatist movement centered around Aden, the historic capital of South Yemen, for years. It is not lost on many that the current division of the country during the Saudi War is very similar to the pre-unification map.

The Saudi-backed government in the south still insists they want full unification of the country under their control, though some of the governments involved in the war, notably the United Arab Emirates, have been hedging their bets in backing the separatists too.

The separatist factions are not insignificant, and could stand as a force in favor of upcoming peace talks, with an eye toward ending the war with the present division remaining in place.