With the interim truce in the Gaza Strip continuing to hold, Egyptian officials say that they are still working on the language of a long-term deal to be signed by all parties involved, and that the deal could be signed as soon as next week. 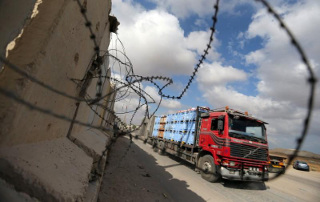 Signs are that while the deal is similar to what Egypt was proposing before, it’s been watered down a bit to placate Israel. The deal now mandates the return of Israeli remains held by Hamas, instead of just calling for talks on that, and also backs away from the seaport and airport pledge.

Instead of assuring Gaza access to an airport and seaport in Egypt’s Sinai Peninsula, the new version of the deal simply calls for talks on the possibility of giving them such access. There was no mention of the previous pledge for a power plant in this version, either.

Instead, the new language focuses on things like giving Gazans a bigger fishing zone and medical aid. Israeli officials are still luke-warm on the idea, saying there is no consensus among them on allowing a seaport for the Gazans.