In a move Russian officials immediately labeled as “unfriendly,” the Norwegian Defense Ministry has announced that the US will be more than doubling the number of Marines stationed inside Norway, bringing yet more combat troops to Russia’s northern border. 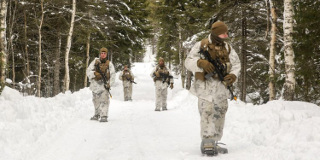 Officially, the US says the troops are there only for “training purposes.” Initially this was presented as a chance for the Marines to learn how to ski, in the event they are at some point doing alpine conflict. Norway’s officials similarly say this is not intended to target Russia.

Yet the US has, for years, been adding more and more troops to countries all along Russia’s frontier, and these deployments to Norway are expected to last at least five years, a long time to learn how to ski if they don’t figure that might include skiing into Russia for a war.

Pentagon officials are already backing away from the skiing narrative at any rate, now saying that tthe troops are there for the “defense of Norway,” which is neither in keeping with the training operation, nor with the claim that this isn’t an operation unrelated to US hostility toward. Russia.

3 thoughts on “US to Send More Marines to Norway, Angering Russia”