For the second time this week, Taliban insurgents attacked and overran an Afghan Army base in the country’s north, this time in Baghlan Province. The offensive lasted about five hours, and left the Taliban in control of the military base and a nearby police checkpoint. 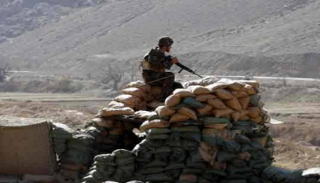 Starting before dawn, Taliban fighters quickly overwhelmed the police checkpoint, killing nine police, then moved on to the army base. They got to the base in Baghlan-e Markazi District and took that as well, killing another 36 troops.

Baghlan Governor Abdul Hai Nemati says that reinforcements have been sent to try to recapture the area. Checkpoints in the area were reportedly set on fire by the Taliban, however, so not everything can be recovered.

Whether reinforcements are being sent beyond the provincial level is unclear, but unlikely. Afghan military reinforcements were sent to Ghazni already, and an even bigger military base was overrun earlier this week in Faryab, with no reinforcements in sight.

9 thoughts on “Taliban Overrun Another Afghan Military Base, Killing 45 Troops”