In his signing statement for the 2019 National Defense Authorization Act (NDAA), President Trump set out his plans to defy Congressional attempts to limit involvement in the Saudi invasion of Yemen. Congress has been expressing concerns for quite some time about war crimes. 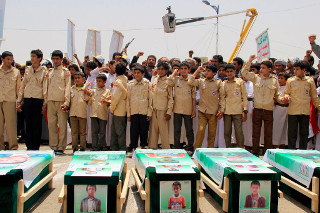 The Trump Administration has been eager to participate in the war, but less eager to discuss those times when Saudi warplanes bomb a school, or a wedding, or a hospital. Most recently, Saudi warplanes bombed a school bus, killing 44 children in the northern village of Dahyan.

This only adds to the questions about US support for keeping those warplanes flying, and helping the Saudis pick targets. Secretary of State Mike Pompeo and Secretary of Defense James Mattis both reportedly “pressed” the Saudis on the matter.

The Saudis clearly aren’t worried, with coalition leadership insisting the attack on the bus was a “legitimate military action.” Saudi internal investigations have, virtually without exclusion, endorsed the incidents that killed large numbers of civilians, and the administration has backed the Saudis consistently at the UN.

As Congress presses the administration to pare back its involvement, these large body counts, especially among children, are only going to make it more difficult for President Trump to justify continued involvement, and refuse to comply with new reporting requirements.