Invaded Friday, the Afghan city of Ghazni fell outright to the Taliban, but was recovered over the course of a little over five days of heavy fighting. The Afghan Independent Human Rights Commission, however, says that there were gross human rights violations on both sides, and many war crimes were committed. 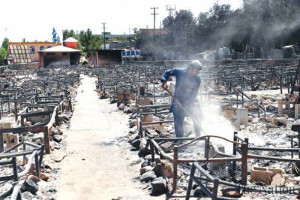 Specifics on civilian casualties are all but unknown in Ghazni right now. Estimates put the deaths among combatants on both sides in excess of 300, but a lot of the heaviest fighting was in the most densely populated areas of the city, and there is believed to be a substantial, if uncounted, civilian toll.

Locals are complaining about the terrible situation inside Ghazni, where almost immediately after the fighting started the entire city lost electricity and virtually all means of communication. There were persistent reports of looting, and fires set to private homes and businesses in combat areas.

Afghan officials are shrugging off the reports, insisting that any human rights violations are the Taliban’s fault, and that security forces are “busy” reclaiming the last parts of the city from the Taliban.

Provincial officials are less forgiving, however, saying that they have long warned the Interior and Defense Ministries that they were unprepared for such an incident, and that the national government did nothing until the fighting started.

UN officials were less willing to talk war crimes or address responsibility, but did say that the fighting was causing “terrible suffering” in the densely populated city, particularly where fighting was taking place in crowded areas full of civilians.

One thought on “Afghan Rights Group: Many War Crimes Committed in Ghazni Battle”