Residents continue to flee the eastern Afghanistan city of Ghazni by the hundreds, complaining that five days after the initial Taliban invasion, fighting is still too heavy, and it’s just not safe to remain in the city. 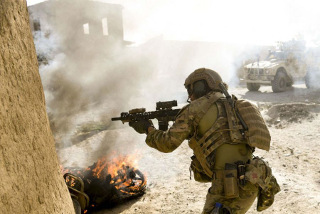 Despite stories from the displaced of a dire situation within, Afghan military statements claim that they have recovered control of most of the city. The same claims were made by Afghan officials on Monday, however, so it’s not clear anything has actually changed from their perspective.

With reports that the US is getting more deeply involved directly in the fight for Ghazni, US officials are also making statements now, and are saying that Taliban forces remain in the city, but that they “do not pose a threat to the city’s collapse.”

There are similar problems with this statement as a bid for clarity on what’s happening, as the US called the entire Taliban invasion “inconsequential” on Friday, and has been downplaying it ever since, right up through the point where the city’s defenses virtually collapsed and the Afghan government had to send reinforcements.

One thought on “Fighting Rages in Ghazni, Afghans Claim Most of City Recovered”