Saudi warplanes attacked a school bus in northern Yemen on Thursday, hitting the bus just as it was passing through a crowded marketplace. At least 50 civilians were killed in the attack, mostly schoolchildren, and 77 others were wounded. 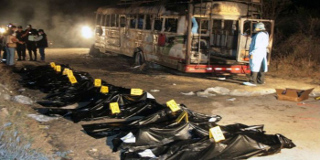 Exact splits between children and people who were shopping at the market is not yet clear. The Red Cross, however, confirmed that “scores” of children were killed, saying that most of the victims were under the age of 10.

Reporters at the scene said it was unclear why the bus was targeted, noting that there are no military installations anywhere near the market. They added that this remote area of Saada Province has few hospitals, and the Saudi naval blockade has left them with no medicine, so the death toll is almost certain to rise.

UNICEF issued a statement condemning the attack, saying there could be “no excuses anymore,” and that the world shouldn’t need yet “more innocent children’s lives to stop the cruel war on children in Yemen.”

Saudi Arabian spokesman Col. Turki al-Malki was defiant about the attack on the busload of children, saying it was retaliation for a missile strike from the rebel Houthis. He said this made the attack a “legitimate military action in accordance with international humanitarian law.”

The Saudis are no strangers to killing scores of Yemeni children in airstrikes with no apparent military goal, and expressing comfort in that fact. At the same time, growing international outcry, as well as fury among Yemenis about the Saudis’ actions are soaring already. The fact that this was a high profile attack scattering the bodies of children across a crowded market is only going to make things worse.