Hamas reported late Thursday that a ceasefire deal has been reached to end a flurry of tit-for-tat strikes over the last two days. They said that the ceasefire is to go into place at midnight. Israeli officials are denying that this is the case. 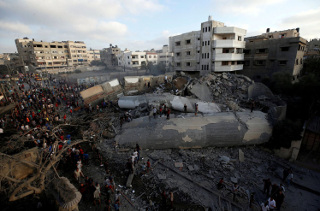 Dozens were wounded on both sides in this latest flurry of strikes, with three Palestinians killed. Of those killed, two were civilians, a pregnant woman and her 18-month-old daughter. A member of Hamas was also killed, though his identity is uncertain.

While some Israeli officials suggested calm would be met with calm after midnight, others totally denied the idea of a ceasefire, saying the security cabinet had ordered the military to “continue acting forcefully.”

The early hours after midnight showed positive signs for those hoping for a ceasefire, as there have not been reports of any fire since then. How long such a ceasefire might last is anyone’s guess, however.

And it being Friday morning in Gaza, that’s not necessarily looking so good. Israel has been killing protesters and wounding hundreds along the Gaza border every Friday for months, and this has often been a source of tension.