Last week, Taliban forces carried out a large-scale attack on an Afghan military base in Chinartu District of Uruzgan Province, officials say. The fact that the attack even took place only started to become public knowledge several days after the raid was over. 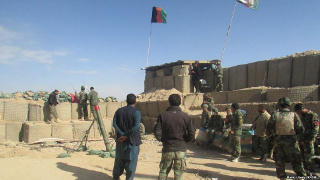 The Afghan military suffered a major loss, and officials are still trying to figure out just how big of a loss it was. The Defense Ministry claimed 27 soldiers killed and five wounded, but indications are it was quite a bit more, according to district officials.

District governor Faiz Mohammad reported on Thursday that recovery operations at the base had found the bodies of 40 slain soldiers “so far,” and that a substantial number of security forces are still missing and unaccounted for.

The Taliban says they killed 46 Afghan soldiers, but denied reports that any of them were killed after capture. Provincial officials say that the base suffered significant damage, and large numbers of weapons were lost in the raid, presumably looted by the Taliban.