In a post on Twitter, President Trump offered a self-congratulatory announcement that sanctions on Iran have been reimposed, declaring them the “most biting sanctions ever imposed,” and saying that they are a push for “WORLD PEACE, nothing less!” 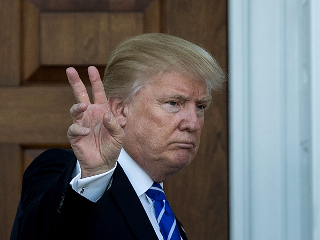 This is the first time Trump has couched the sanctions as seeking anything like peace. In general, he has presented them as punishing Iran for their civilian nuclear program, and trying to force them to negotiate. Iran has rejected any talks that come under threat.

Secretary of State Mike Pompeo is demanding massive, and largely unspecific, changes in behavior by Iran as conditions for any sanctions relief. Of course, we’ve seen in the past that US sanctions have a momentum of their own, and even in cases where, like Iraq, the sanctions escalated into an invasion, removing them didn’t happen instantly even after regime change.

Iranian FM Javad Zarif was very dismissive of Trump’s comments, saying “tantrums and CAPPED TWEETS won’t change the fact that the world is sick & tired of US unilateralism ” He predicted that “the world won’t follow impulsive tweeted diktats.”

That appears to be an open question. Trump is clearly betting, as the lone country pullout of the P5+1 nuclear deal, he can still force much of the world to go along with restoring the nuclear sanctions just for fear of being punished by the US.

10 thoughts on “Trump: Sanctions on Iran a Bid for World Peace”