Having resumed their offensive last week, Saudi-led forces pushed into the Yemeni port city oh Hodeidah over the weekend. They faced heavy resistance, and the whole weekend saw fighting raging across the area. 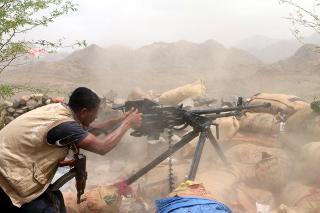 At least 80 people were killed, with heavy casualties reported on both sides. Among the killed, 30 fighters who were part of a UAE-led force pushing into the city from the south. They were ambushed just south of the Hodeidah airport.

Hodeidah is the last rebel-held port in Yemen, and subsequently the lone source of aid for the entire northern half of the country. It is estimated the port imports food for 8.4 million people, and this has led to repeated warnings that the conquest of the city could lead to a more or less immediate, major famine.

And while that remains a concern, perhaps as big of a problem is that the heavy fighting in and around the port is liable to render the port effectively closed at any rate, either too dangerous for ships to make deliveries to, or impossible to transport those deliveries from the coast to the city’s outskirts, where fighting is raging.

One thought on “Heavy Fighting in Yemen Port City: Over 80 Killed in Last Two Days”