Late last week, a delegation from the US State Department was in Qatar to meet with Taliban officials. Officials are now saying that the meeting ended quite positively, and that both sides agreed to hold more meetings in the future. 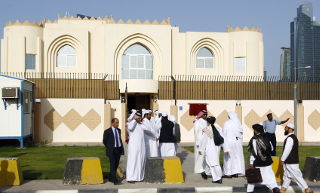 Taliban officials said this was short of “peace talks,” and described it instead as meetings on the process of “initiating formal and purposeful talks.” They added that there were “very positive signals” from the meeting, and that it was held in a “friendly atmosphere.”

This was particularly significant in that the Taliban officials in Doha were willing to confirm that the meeting had happened at all, and spoke favorably about future meetings. In general, even when the Taliban is known to be in talks, they tend to be very reluctant to talk about it to the press.

It is US officials who are being more evasive about the process, with the State Department having affirmed that the US is “exploring all avenues to advance a peace process,” but the delegation itself so far refusing to either confirm or deny that any talks had taken place.