In an off-camera briefing at the Pentagon, Defense Secretary James Mattis says that the US is not seeking regime change or collapse in Iran, adding that no policy is in place that has been instituted like that. 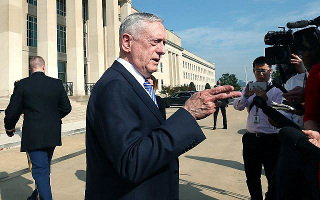 Mattis said the US goal was to get Iran to “change their behavior on a number of threats that they can pose with their military.” He did not elaborate on that point, or how the US plans to get there beyond threats and sanctions.

Other officials, however, say that President Trump is continuing to push his idea of an “Arab NATO” which would consist of the Gulf Arab states, Egypt, and Jordan. The whole point of this would be to create an alliance that would  confront Iran across the Middle East.

Mattis didn’t mention that, but did address a reported by Australian military sources who claimed that President Trump is prepared to attack Iran militarily, and that the bombing could begin in the next month. Mattis said there were no such plans, calling the reports “fiction.”

The Australian officials, who were not named, said that Australia had already agreed to help identify targets in Iran, and that the US attack would center on booming Iranian nuclear sites.

22 thoughts on “Mattis: US Not Seeking Regime Change in Iran”