Much has been made about the Trump Administration’s hostility toward the media, and orders to keep troop levels classified in various war zones. The Pentagon’s lack of candor with the press is now also a growing problem, and is irking reporters who cover Pentagon briefings. 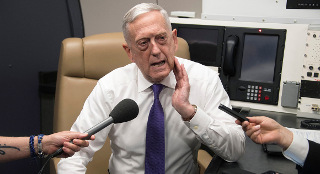 Which is to say, the reporters who are supposed to cover Pentagon briefings, but are mostly sitting around at this point. Defense Secretary James Mattis hasn’t briefed reporters on camera since April, and his spokesperson Dana White hasn’t either since May. There used to be plenty of chances to ask questions of Pentagon leadership: now it’s virtually impossible.

Earlier this month, Army Chief Gen. Mark Milley had a news conference at the Pentagon. Pentagon officers, however, warned reporters that he was only willing to talk about the specific location of a new command, Other questions were rejected by officials, with no answer given. Even a reporter commenting that they don’t get to see Gen. Milley enough to ask questions was quickly cut off.

Reporters at the Pentagon say that less and less information is being offered, and that when officials do talk, they’re only going to address subjects they want to talk about. Trying to keep the American public informed based on Pentagon statements is an exercise in futility.

Pentagon officials defended their lack of media access, saying they have an obligation to “get the facts right” and are only interested in working with journalists they feel “are equally committed to getting it right.” Former officials added that Mattis is concerned by making Trump angry with him. That means, according to those officials, he is erring on the side of “safety” by cutting out the press.