Citing steps Egypt has taken over the last year, the Trump Administration has decided to unfreeze $195 million in foreign aid earmarked for Egypt’s military. The money was initially set aside in fiscal year 2016, and State Department officials say it will now be delivered. 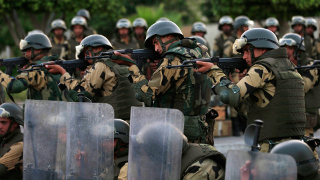 The funding was withheld over human rights concerns, as well as because of US government anger over changes in Egyptian law regulating foreign NGOs. The Egyptian military junta greatly increased the penalties for NGOs seen as taking certain undesirable activities.

US military aid to Egypt is theoretically illegal at any rate, because of the prohibition on funding military juntas. The US has circumvented that by not choosing to recognize the 2013 coup d’etat which ousted the elected government.

The coup immediately fueled human rights concerns, with Egyptian forces killing huge numbers of civilian protesters in the streets as “terrorists,” and sentencing massive numbers of allies of the former government to death.

Historical US ties to Egypt, however, are heavily between the two militaries. This meant the US was resistant to the brief civilian government in Egypt, and quick to embrace the new junta when it took over.