Despite warnings not to do so by the administration, both the House and Senate have officially barred the delivery of any F-35 warplanes to Turkey as part of the final version of this year’s military spending bill. 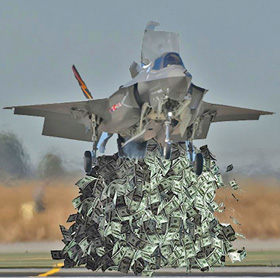 The ban demands changes from Turkey, including the release of US citizens who were “wrongfully detained.” The language explicitly mentions a pastor detained by Turkey as part of the banned Gulenist movement.

Defense Secretary James Mattis has warned that preventing Turkey from taking delivery of the 50-75 planes planned would cause a supply chain disruption in the F-35’s manufacture, and raise the already high costs of making the planes.

The F-35 development was wrought with delays and excessive costs, and administration officials are keen to defray some of this cost by exporting the warplanes en masse to a number of nations.

6 thoughts on “Congress Blocks Shipment of F-35s to Turkey”